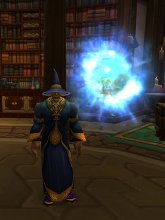 I’m delighted to resurrect the column that brought me to Massively-that-was, MMO Mechanics, for the ravenous readers of MOP. The column focused on the various mechanics that underlie the MMOs we spend so much time in, exploring the under-the-bonnet workings that keep players playing and tackling the issues some of these mechanics present. You might remember the original column from its brief tenure around a year ago, but if you don’t, you can still find it on the interwebs. To get the ball rolling again, I’m going to discuss the logic behind fast-travel, the merits and perils of its various mechanics, and their use in MMOs.

With such vast, interesting worlds lying tauntingly at our characters’ feet, navigating such an impressive amount of virtual space can be both a challenge and treat simultaneously. Just as in the real world, the secret of a true adventure is chasing the action wherever that may take you by whatever method you can, all to keep your quest alive. 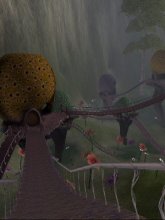 Depending on where we must go and the method by which we find ourselves there, however, what was once an exciting adventure can become mundane rather quickly. Say, for instance, you must travel to work each morning and travel home: This journey is repeated with enough regularity that you end up so familiar with the route that it becomes tedious, no matter how pretty and exciting it was the first time around. If you had a switch that could magically apparate you there and back again, effectively abstracting away that tedium, you might feel tempted to use it.
This feeling is intensified in-game because it is just that: a game. Players will inevitably want to log in and get to the heart of the action to maximise the impact of each play session, especially if their play time is limited, so developers have constructed many different mechanics to strip away potentially frustrating travelling time once an area has been initially explored. You need look no further than World of Warcraft to see how prevalent such mechanics are in the modern MMO; flight paths are dotted at regular intervals all around Azeroth, and longer journeys employ the use of zeppelins, portals, or boats. Dungeon and raid finder tools allow players to quickly connect with automatically assembled pickup groups without any effort, instantly transporting them to the instance when all members accept the grouping.