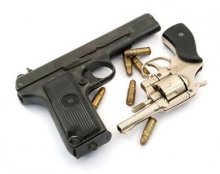 Gun owners are entitled to take their weapons anywhere they want, but there are laws governing how guns can be carried or transported. Gun laws in California are enforced by the state’s Department of Justice Bureau of Firearms. This state-regulated agency enforces the laws regarding the manufacture, sales, ownership, training and transfer of firearms across the state. Depending on your mode of transportation and your destination, the laws for how you travel with your gun can vary.

Transporting a Firearm In a Car

Under California Penal Code section 12025, a United States citizen that resides in California, is over the age of 18, and is lawfully entitled to carry a firearm can transport a pistol, revolver or other firearm in a motor vehicle as long as the gun is not loaded and is stored in a locked container.

Guns that cannot be concealed, like a shotgun, do not have to be locked in a container. The shotgun must not be loaded while in transit.

Traveling with a gun is legally permissible. Guns and ammunition must be kept in checked luggage. A gun and ammunition may not be in carry-on luggage. Firearms must be declared at check-in, unloaded, in a hard-sided locked container. The passenger must provide a key or combination to the container upon request and remain present as the firearm is being examined.

According to the California Department of Justice, only those who have a CCW (California Concealed Weapon) permit are allowed to carry a concealed gun in public. Permits, which are strictly controlled, are issued by a county sheriff to county residents or by the head of police to city residents.

Traveling from A Different State

California’s gun laws are applicable to every person in the state of California, including non-residents. Those with a concealed-weapon permit in a different state are not entitled to carry a concealed weapon in California.

Breaking the TSA’s rules for traveling with a gun can result in a $10, 000 fine or arrest. Carrying a concealed gun in California without a state-sanctioned permit can result in a hefty fine and prosecution. In most cases, it will be a felony charge.