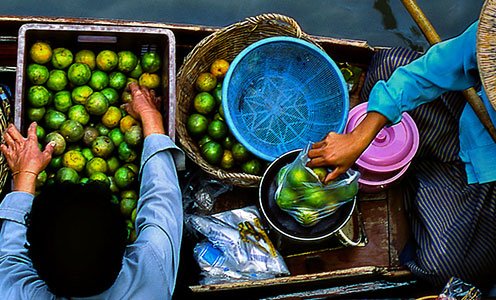 Stretching halfway across the globe, and home to nearly 60% of the world's population, Asia is the most diverse of all the continents. From the wilderness of the Arctic Circle to the jungles of the equator, from the world's highest mountain to the ocean's deepest trench, all the natural world is here. Asia holidays take as many forms as the travellers themselves – will it be wild explorations of some of the world's remotest spots, high-tech city breaks in fast-growing, never-sleeping metropolises or relaxing breaks on those white-sand beaches that'll take your breath away?

Climbing Mount Everest in Nepal is one of the world's great challenges, but even stopping among the prayer flags of base camp to explore the spectacular landscape of the Himilayas is a once-in-a-lifetime holiday. For an ultra-modern city break, journey to the 24-hour neon of Tokyo or Shanghai for shopping by day and partying all night. The beaches of Thailand and Malaysia are the continent's playgrounds – perfect for kicking back on a white-sand beach, and fruity cocktail in hand. History buffs throng to one of the most popular tourist attractions in Asia - Angkor Wat in Cambodia - for the huge compound of delicately decorated Hindu temples.

Asia dining is the home of world-class street-food – from fiery pho soup served up from portable gas cookers on Vietnam's side-streets to the poppadums and roti of Southern India's markets, you can eat like a king very reasonably here. Japan has more Michelin-starred restaurants than anywhere on earth – head to Tokyo for the finest, freshest sushi served up by masters of their trade. A culinary tour of China takes in a world of flavours from the spicy tang of Szechaun chilli dishes to delicate steamed dim sum buns served in elegant Hong Kong tea-houses.

Some of the world's great Colonial-style hotels are dotted around Asia – hotels like Raffles in Singapore – birthplace of the Singapore Sling cocktail – or the string of converted Maharajas' palaces that make touring Northern Indian such an old-world experience. Japan offers a huge range of accomodation options – from the tatami mats and communal baths of traditional ryokan inns, through tiny city-centre capsule hotels to the cartoon surrealism of their Love Hotels. For the ulimate in natural secluded getaways, Borneo offers rough timber-hewn nature lodges for seeing Orang Utans in their rapidly dwindling habitat.

If your Asia holiday takes you to halfway across the bustling Galata bridge in Istanbul, the boats of the Bosphorus hooting below you, birds wheeling on the wind, you'll have one foot in Asia and one in Europe - much like Turkey itself.