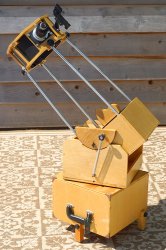 Have scope, will travel! This Dobsonian not only gives great views, it also fits into an airplane’s overhead storage compartment.

One of the best reasons for learning to build telescopes is that you can make instruments that perfectly match a particular observing need or circumstance. As an editor at Sky & Telescope, my “circumstance” happily involved a lot of travel, and as a result I found myself dreaming of a telescope that I could take with me as I zig-zagged across North America from one star party to the next.

It seemed a shame to arrive under the dark skies of the Texas Star Party or Mount Kobau without a telescope of my own.

For a while, I made do with my Questar — an icon of portability but offering only 3½ inches of aperture. I felt the dark skies I was lucky enough to enjoy deserved the light grasp of at least a 6-inch scope. Initially I found a solution in simply cutting the tube of my 6-inch f/6 Newtonian in half. 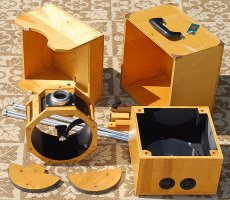 This way I could fit both tube halves (stuffed with my cold-weather gear and other clothing) and my lightweight German equatorial mount into one large suitcase. This configuration survived a few trips, but eventually my luck ran out, and some rough treatment by baggage handlers resulted in a crushed telescope and a return to the drawing board. I resolved that my next travelscope would have to be compact enough to go as carryon luggage.

Having seen a fair number of highly portable scopes in back issues of S&T and on the Internet, I knew I could come up with a workable scope, but I also wanted to avoid a few pitfalls. I didn’t want to relegate some major portion of the instrument as checked baggage, or make a scope that would literally be a pain in the neck to use.

In addition to carryon-luggage port-ability, the scope would ideally have these attributes:

• at least 6 inches of aperture, although 8 would be better;
• focuser that doesn’t come straight out the side of the tube;
• maximum and minimum eyepiece heights that allow seated viewing;
• effective baffling against stray light;
• no-tools setup.

When I sat down with a clean sheet of paper to make some preliminary sketches, all roads seemed to point to some kind of nested, truss-tube Dobsonian. After ironing out the details, I converted my 6-inch f/6 reflector to this configuration. I found not only that the design worked better than I expected, but that the finished scope was considerably smaller than the typical airline carryon allowance. This suggested the possibility of an even larger instrument utilizing the same design. 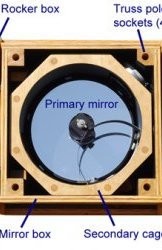 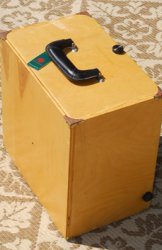 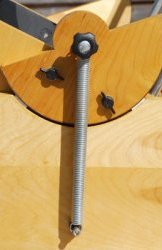 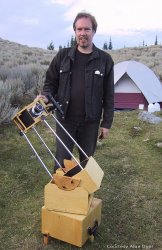 @want2workrail @Colinp02 @alithealien that's for Travelodge, I know there breakfast offer, for other hotels nearly always have their breaky Sun, 24 May 2015 06:15 PM