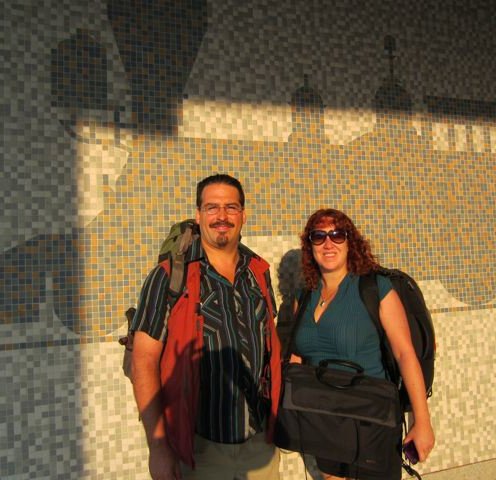 Now that I have experience with Amtrak's overnight routes, I wanted to clear up how the whole experience was for me, as a younger guy. Unlike most of the other writings you'll find, I'm a fairly normal 20 year-old who travelled alone. I don't have a particular soft spot for dressing up the Amtrak experience or anything.

Overnight travel on trains isn't for everybody - or most people, really. I love seeing new things myself and don't care much for being locked in the same place for a while. That's pretty normal, but most people don't like the time associated with travel and choose methods that are quick, but not nearly as comfortable or scenic as the train, like air travel. The scenery and my lack of experience in the middle and southwest parts of the USA enticed me to give three days of my life away towards seeing it all.

The train is actually slower than driving for long distances from Virginia since it wraps to the Northern part of the country to go west. It was neat seeing Pennsylvania, Ohio, and Chicago for the first time though. There was snow on the ground of most of the country when I rode, so that really made traveling through these flats a treat. Seeing the southwest unfold was the great part of the trip though - that's the part that made it worthwhile. The desert may sound boring but seeing the glow of the sun out there in the end of December had a nice warmth to it! My trip ended on a commuter train down the west coast that hugged the Pacific coast more than the 5 does!

Here's my quick summary of what was good and bad:

The best part of the trip, hands down, was the view across the country. Sure, you can fly across America in 3.5 hours, but you miss a lot of really special landscape. Seeing the little towns and cities that give America its personality really was a privilege. Going through the backyards of many folks home gave a small, quick glimpse into their lives. The landscape transforms in literally 90 seconds over in the Southwest from flat to dry to mountains to eternal desert. The train cuts through many parts of the country that aren't around roads and can't be seen while driving. Some of them so remote, that you have to be on the train to see them! There are several other routes you can take as well; one leading through the North to the Northwest, another leading through the Rockies, and the last running through Texas. Most people take the route through the Rockies, called the California Zephyr, but I rode the Southwest Chief - a decision I do not regret.

@Somchai the Dog: I used to travel up on the overnight train from Chumphon on a Fri. Stay in Khao San for a night and head back Sun night. Arrive morning. Mon, 1 June 2015 05:15 AM

Quote of the day: "I don't travel on a train with a watermelon for no reason." #watermelonman #trainstories #bestiesadventure @justagyrl16 Mon, 1 June 2015 12:21 AM