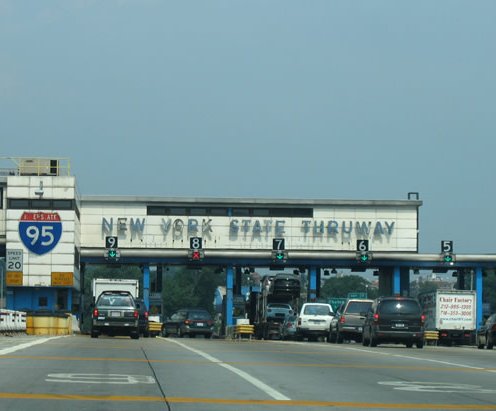 We meet again, as 2.1 million residents of the Washington area attempt to leave the city by car this Christmas week, desperately crawling along the demonic hellscape of your infernal asphalt wasteland.

Ah, 95, you are crafty this year — with your dulcet promises of fully staffed toll plazas and repaired roads, of HOV lanes for everyone. But you can’t fool us, not this time. Not while the Maryland House travel plaza remains closed for renovation and we’ve had to use the bathroom since New York Avenue 40 minutes ago. Not while the signs to Philadelphia turn blurry and fiendish before our eyes, a Hieronymus Bosch painting disguised as a road.

For whom do those jingle bells toll? They toll for us, I-95, your wretched, wretched prisoners, bottlenecking to our doom.

“If I compare it to other roads — it’s not Route 66, ” says Doug Kirby, the publisher of the Roadside America series. “People don’t come from around the world for the romance of it.”

No, Mr. Kirby. No, they do not. I-95 does not have Route 66’s cross-country nostalgia. It doesn’t have the splendor of the I-10, either, which weaves from California through Texas, showcasing the magnificence of the desert. It doesn’t even have the cultural cachet of the materialistic, broken-dreamed Sunset Boulevard.

“It’s really more of a utilitarian road, ” Kirby says. “It’s not about a scenic route.”

He broke down on I-95 once, back in college years ago. A truck rammed the trailer he and some friends were pulling; they had to limp back up the East Coast from Florida, where they had vacationed, to New Jersey, where they went to school. They hadn’t budgeted for the delay. They paid for gas and had $2 left for food, which they spent on french fries at a weird rest stop in South Carolina called South of the Border, which features a sombrero-shaped observation deck.

These are the sorts of things that happen on I-95.

If the Donner Party set off on a road trip now, I-95 is the interstate they would eat each other on.

It is the longest north-south interstate in the country, and it passes through the most states (15). From Houlton, Maine, to Miami, it stretches 1, 900 miles. It was built in pieces, built on dreams, built on the notion that northerners might like to travel south for the cold months of the year. Construction on the route that would one day become I-95 began in Maine in the 1940s and Florida in the 1950s. The portion linking the Delaware Memorial Bridge with the Maryland Harbor Tunnel was dedicated by John Fitzgerald Kennedy in 1963.