Pincourt beefs up one bus route, cuts another and gets bigger buses December 16, 2014 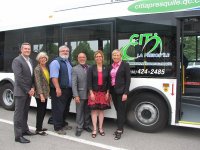 The #35 also has stops at the Dorion AMT station and the STM bus terminal at Macdonald campus, to access even more public transit.

This bus has proven so popular that bigger buses are being added to the fleet and departures during rush hours have doubled to accommodate the crowds.

On Monday, the town of Pincourt in cooperation with the CIT la Presqu’Île announced it would be replacing the mini-buses that travel this route with MIDIbuses, slightly larger vehicles that can carry up to 50 passengers versus the 25 that fit on the minibus.

The transit agency has purchased two of the intermediate sized buses to add to the fleet of 30 vehicles serving 24 routes.

Because of declining ridership on the #32 route, that line will be discontinued this fall, freeing up another bus to service the busy #35 route.

These changes will take place Aug. 31, at the start of the new school year.

“There will be no increase in (ticket) price for the users and by eliminating one bus we save money, ” said Pincourt Mayor Yvan Cardinal.

“This is a great bus for the John Abbot students because they can go to school in the morning, come home for lunch and go back. Before there were only buses in the morning and at night, ” Cardinal said.

“We believe that ridership is up because of many factors, ” said Manon Charest, general manager of the CIT La Presqu’Île.

The public transit agency is celebrating its 10th anniversary and Charest said the needs of the ridership are constantly tweaked to reflect new trends.

“We have seen that people are not necessarily taking the bus to the train station (to go into town) but that they may travel from Pincourt to Vaudreuil-Dorion for work.

“More and more people want to live and work in their region, ” Charest said.

“Taking cars off the road is part of our development plan, and the citizens have told us they want this, ” Cardinal said.

@OnPointRadio @tomashbrooknpr How does one get promotions, training, benefits, trade shows, international travel with "on demand" jobs? Mon, 1 June 2015 08:21 PM