A couple of weeks ago, my daughter Sarah and I needed to brave an early morning snow storm in order to catch a flight to San Juan, Puerto Rico. It was touch and go as we moved at a snail’s pace behind two huge plows that plodded along through the almost white-out conditions. And it became even more frightening when the driver of a huge truck to the left of us started exhibiting extreme road rage because he couldn’t travel any faster.

But we made it! And when we finally arrived in the capital of this beautiful Caribbean island, we were rewarded with the warmth and sunshine that we had worked so hard to experience.

Our great vacation was due in large part to our lovely accommodations, the San Juan Marriott Resort and Casino. Right on the Atlantic Ocean, and conveniently close to so many restaurants and shops, this Marriott was a great place to stay for boomers like me who are happy to travel alone or with companions.

So what’s in store for what is starting out to be another good year for boomer travel? AARP has provided some statistics through an interesting infographic:

AARP found that travel was the number one aspirational activity for people 50+ and here is what this organization says were the highlights of their survey: 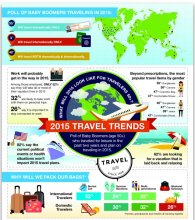 Bucket List will be the Biggest Motivator for International 50+ Travel

People 50+ plan to fulfill their travel dreams and are actively planning for trips on their personal bucket lists. AARP predicts that 32 percent of people 50+ that will travel internationally in 2015 will do so to check off a destination on their bucket list. Destinations include Paris, Italy, London, Caribbean Islands and other international spots.

RT @Maddy_Dychtwald: Planning your summer #vacation? Consult this report on the differences between how #Millennials and #Boomers #travel h… Thu, 28 May 2015 09:38 PM