Once we had met with Dr Mohammad and his wonder team, he told us they had made a plan to produce a short movie to set the scene for our wedding in Petra to the delegates of their first ever international conference on cultural tourism. We had timed our visit with this conference so that we could showcase a traditional Nabetean ceremony to the international audience in the hope that the news of the wedding, and the fact that Jordan is a safe and wonderful place to visit, would be spread far and wide. Also, cultural tourism has become somewhat a serious interest of ours. 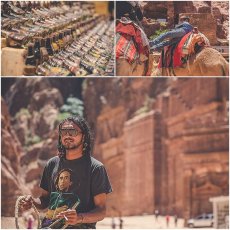 We have found that through our adventure we have a small power to show people places that they have never considered travelling to. Our audience can travel with us vicariously and one day, we hope they; we hope YOU, will step out of your comfort zone too and travel to those magical places on your bucket list, safe in the knowledge that you can talk with us about our experiences, or that you can read our thoughts here on our blog.

The video sounded like a great idea, despite our lack of acting skills and our severe lack of sleep we agreed to go with the flow and to see what happened. The video was to explain a Nabetean Love story leading up to our wedding the next day. Alex played a sculptor who was enrolled as a soldier who was charged with protecting his city, Petra. 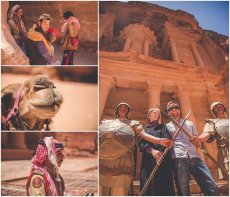 One day, before his enrollment, when busy by the local well, he saw a woman lost in the desert. Exhausted from the heat she drops to the ground and he rushes to her side with water from the well to quench her thirst. He saves her life and sends her in the right direction. They part ways but after he returns from fighting for his country they meet again, they tie a ribbon in a knot in a tree, a symbol of their engagement and the wedding is planned. 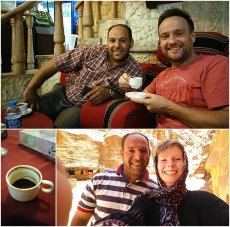 The day turned out to be filled with adventures; we got our first look at the Treasury and my goodness, is it breathtaking! The affectionately named pink city lived up to its name and glowed in the afternoon sunlight. Huge smiles spread across our faces and remained there for our entire visit…my smiles were particularly wide when Alex was dressed as a Soldier and joined the ‘soldiers’ for a re-enactment of a fight scene.

The video is on its way via post to the UK to be reduced to an up-loadable size so we can share it with you. The Dr and his team seem to have produced it in a size that means it could be played on the front of the White House…I think they liked our acting better than we did and have high hopes for the movie! Lottie captured some stills of the day which you can enjoy until we get the film. 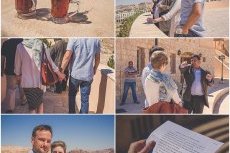 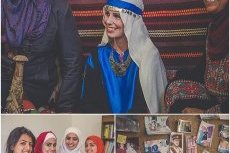 @3novices: #3Novices : Brace up to increase in service tax from today Weddings, travel and stay, visits to the salon, concerts and plenty of other thi… Mon, 1 June 2015 12:20 AM